For the past three nights, The Pembrokeshire Murders, a televised adaptation of a real crime story, has captivated audiences across the nation.

Starring Luke Evans as Detective Chief Suprintendent Steve Wilkins, the series follows the investigation that brought down serial killer John Cooper, with two cold cases from the 1980s being reopened and explored in greater detail with the help of modern technology.

In the end, the murderer was captured with the help of footage from a 1989 episode of Bullseye, which was used to help match him with witness reports.

Cooper is portrayed in the TV series by Keith, whose previous acting credits include Marcella, Eddie the Eagle and Trainspotting.

Those who tuned into tonight’s finale commended Keith on his ‘chilling’ portrayal of the killer, with one person tweeting: ‘Keith Allen couldn’t have been any creepier.’

‘How good and creepy is Keith Allen playing John Cooper in the #pembrokeshiremurders,’ another viewer said.

‘What a powerful ending to #pembrokeshiremurders and a great performance by Keith Allen who is chilling and creepy in equal measure,’ someone else remarked.

Luke was also lauded for his depiction of Detective Superintendent Steve Wilkins, with one viewer pointing out that the actor was able to convey the multifaceted nature of his character’s persona.

‘Luke Evans has done an incredible job at portraying DSI Steve Wilkins, showing his change in emotions in a sublime and powerful way,’ they said.

Another stated that the Beauty and the Beast actor was on ‘top form’.

Pembrokeshire Murders is available to watch on ITV Player. 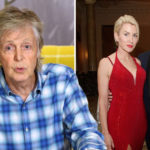