The Voice UK viewers were left ‘in tears’ after watching Sir Tom Jones deliver an emotional rendition of one of his songs, With These Hands.

During the latest episode of the singing competition, fellow coach Olly Murs urged Sir Tom to sing the song, which he released when he was in his mid-twenties.

Olly said that he ‘loves’ a story Sir Tom previously told about Elvis Presley, when the Welshman came across the King of Rock and Roll singing that very song when they first met in 1965.

Sir Tom didn’t need that much coaxing before he happily obliged, giving a powerful performance of the song, which was first released by Eddie Fisher in 1953.

A multitude of The Voice UK fans praised him on his ‘amazing’ vocals, with one person saying they were left ‘absolutely bawling’.

‘Tom Jones has got better and better as time has gone on, his voice is just as huge as it ever was but the emotion he puts into a song just breaks me into bits,’ one person said.

‘Anyone else cry at Tom Jones’s amazing voice?’ another person said.

Someone else tweeted that they could ‘barely type through the tears’ after watching him perform the song.

‘Got tears in my eyes listening to Tom Jones sing on the voice. What a talent,’ one Twitter user said.

‘Actual tears streaming down my face right now. How I love Sir Tom Jones!’ another commented.

‘Always loved that With These Hands, so special to hear him sing it again. Thank you.’

While viewers may have been taken by Sir Tom’s incredible voice, several were left feeling less than impressed by one of the decisions the coaches made during the programme.

One of the contestants on tonight’s show, Rebecca Watkins from Swansea, rocked the stage with her rendition of AC/DC’s Back In Black.

However, she received no turns, prompting several fans to call for a ‘rock judge’ to sit in one of the spinning chairs as ‘so often good rock singers are not chosen’, one person said.

During the launch show of the current series of The Voice UK, Sir Tom was brought to tears when he received a special message from his friend Stevie Wonder in honour of his 80th birthday.

After singing Sir Tom’s song It’s Not Unusual in a video message, Stevie said: ‘I had the pleasure of not just meeting the person who sang that song, but meeting a good friend. And I know that that friendship will last for a lifetime.’

The Voice returns next Saturday at 8.30pm on ITV.

The Voice UK: Fans call for ‘rock judge’ on show as yet another rock singer receives no turns 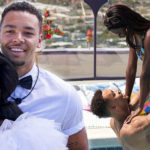