A viewer who called in for help on This Morning told how she feels ‘guilty’ when trying to homeschool her children as her paralysed husband lays in hospital.

Speaking to agony aunt Deidre Sanders on Wednesday’s instalment, a viewer called Kathryn from Lancashire, phoned in to ask for advice and help.

Kathryn explained to Deidre and hosts Holly Willoughby and Phillip Schofield that she is struggling to cope in lockdown after her 44-year-old husband had a stroke in October.

‘He had a stroke on the 10th October, totally out of the blue,’ she began.

‘He’s been in hospital ever since. He’s lost his speech and also paralysed on his right-hand side.’

Speaking about the struggles of homeschooling her two children, who are 16 and nine, Kathryn continued: ‘I am really struggling with their homeschooling.

‘They’re getting really behind at school and then I just feel really guilty and wonder what’s best to do really to keep them going.’

‘You have got a lot on your plate,’ Holly told her.

‘Part of the guilt I think,’ Phillip chipped in.

Weighing into the discussion, Deidre told Kathryn that she ‘needs to be kind to yourself’.

She continued: ‘You’ve got an enormous amount to cope with. We say to parents anyway, “You’re not professional teachers, you’ve got to be realistic about what you can do”.

‘Kathryn, you’re coping with all of this as well. You must be worried about your husband, it’s massive question mark up there “That is the future going to be?”.’

The lockdown means that all schools and non-essential shops are closed until further notice.

Under the new guidelines people are only allowed to leave their homes for essential travel, which includes exercising or going to work. 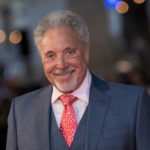 Sir Tom Jones told by music bosses he wouldn’t make it because of his curly hair: ‘They try to change you’