This Morning viewers were treated to a festive treat during Wednesday’s show, after a guest appeared with her Christmas tree still up.

It might be mid-February, with the big day happening almost eight weeks ago, but Saffron from Dorset is still proudly showing off her decorations.

She was on the show to talk about her dog Rosie, but hosts Eamonn Holmes and Ruth Langsford were soon put off by the sight of the tree behind her.

‘Saffron, look, before we go any further – why is your tree still up?’ Eamonn said.

‘Well because I love Christmas. I just feel it’s a bit of time to have some brightness around,’ Saffron replied.

A surprised Eamonn added: ‘Probably not worth taking it down now, is it?’

‘I don’t think I’m gonna bother now. Keep it up for the rest of the year!’ Saffron said.

Viewers couldn’t believe their eyes after seeing the tree. Some took to Twitter to share their shock, but others were more supportive.

‘I love the fact she’s got a Christmas tree up in February,’ one said.

‘Shes still got her Christmas tree up – can’t fault her!’ another added.

It might not be Christmas anymore, but if Saffron wants to keep her house looking festive during lockdown, we say fair play!

She isn’t the only person on morning TV to still have their tree up either.

The presenter, 52, described the decorations that were still hanging up at home, revealing that it was still adorned with lights and tinsel.

This Morning airs weekdays at 10am on ITV 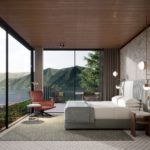