This Morning viewers have praised a mum of nine children after she revealed she doesn’t pressure any of her kids to do homeschooling.

The Yorkshire Shepherdess aka Amanda Owen appeared via video link on Wednesday’s instalment, where she spoke about the chaos of running a farm and homeschooling her children during lockdown.

‘We just have to make it up as we go along,’ she began.

‘People say “What’s a typical day?” There isn’t, there are so many variables that can go wrong. Basically you just wake up and see what comes at you.

‘And as long as these guys have got smiling faces and everyone’s ok, that’ll do.

‘Who cares if it’s porridge for lunch?’

Appearing alongside two of her children, Edith and Violet, Amanda explained that as a family they all have to ‘pull together’ to help because they have so many animals on the farm.

Holly went on to quiz the mum about homeschooling as she asked: ‘Have you got nine screens for the children? How does it work?’

‘Basically, no we haven’t got nine screens and actually, we have got quite a way of doing it,’ Amanda replied.

‘Well, we don’t usually do all of the lessons, we do other stuff like I’ve been making some bread for my focaccia,’ Violet explained.

‘The point is they log in, they know what their school topics are and they will do them and that’s it,’ Amanda continued.

‘I know there are some parents who will dress their kids up in school uniform and sit them there from nine until three, but I’m not a big believer in too much screen time.

‘It’s there to guide them, give them an idea of what the topics are and if they need help they can talk to the teachers.

‘But, say yesterday there wasn’t much homeschooling that went on. What did you do yesterday, Edith?’

To which her daughter simply replied that she did some snowboarding and milked their cow.

Taking to Twitter after the interview, viewers praised Amanda for her no pressure approach.

One tweeted: ‘Yorkshire Shepherdess always talks sense and is a great mum.’

While one added: ‘Love this Yorkshire farm mum!’

‘Homeschooling is prime time to teach kids the stuff that schools don’t and that is how to survive later in life without a parent doing everything for you, learn to cook, bake, clean, mend things, sew, create.’ 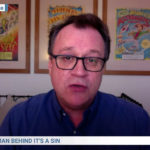 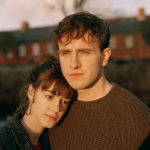