Tiger King star Carole Baskin doesn’t want to give any more air to the thought that Joe Exotic could be pardoned by Donald Trump in his final hours in office.

Exotic is hoping to be made a free man by the president and already has a limo waiting nearby his prison in Texas, which will take him to get his hair cut should his appeal be approved.

The former zookeeper, real name Joseph Maldonado-Passage, is currently serving a 22-year sentence for animal abuse and for the murder for hire plot against Baskin – and Baskin is keeping her fingers crossed he’ll remain behind bars.

‘I’m not willing to breathe any more oxygen into such an idea as pardoning someone who walked up to give healthy tigers and shot them so he could make space for tigers the circus wanted to board in their cages,’ she said in a statement shared on Good Morning Britain.

It’s been claimed that Trump is expected to make 100 pardons before leaving the White House hours ahead of Biden’s inauguration on Wednesday.

Exotic’s team are convinced Trump will be freed in hours and celebratory plans are already in order.

‘We have good reason to believe it will come through,’ private investigator Eric Love, who is leading Exotic’s case, exclusively told Metro.co.uk.

‘We’re confident enough we already have a limousine parked about half a mile from the prison. We are really in action mode right now.’

Love continued: ‘I’ve got make-up, wardrobe, the whole unit that will come up. The first thing Joe wants to do, he wants his hair done.’

It’s only a matter of time before Exotic’s team will be delivered news of Trump’s verdict.

Good Morning Britain airs weekdays at 6am on ITV. Tiger King is available to stream on Netflix. 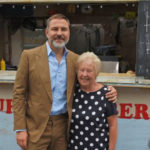 David Walliams thanks NHS as mum Kathleen, 77, gets Covid vaccine: ‘I could hear the joy in her voice’