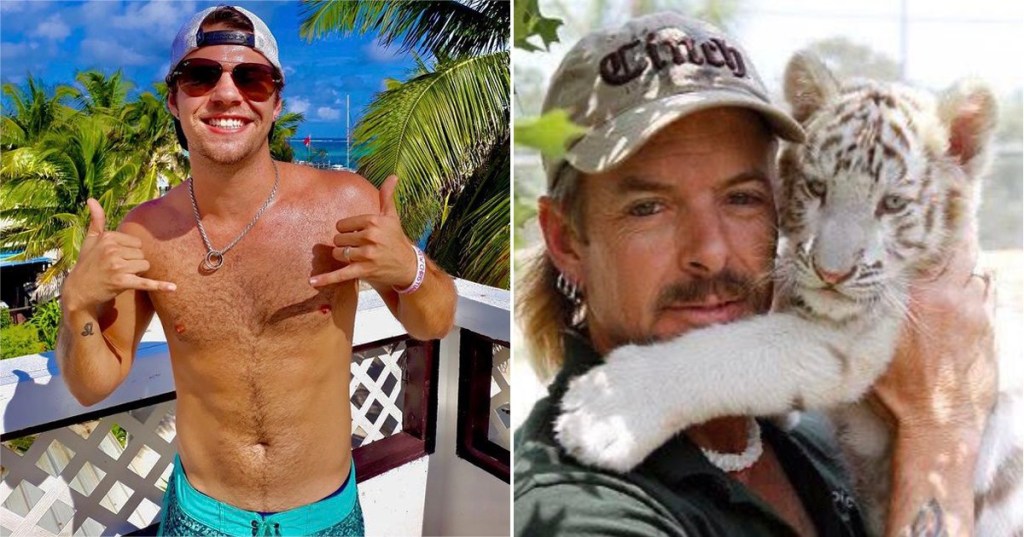 Dillon Passage and Joe Exotic are going to remain married while he’s in prison (Picture: Netflix/Instagram)

Tiger King star Joe Exotic has insisted he will remain married to husband Dillon Passage despite their public break-up announcement a month ago.

The 58-year-old roadside zoo owner married Dillon, 22, back in 2017, and despite Joe now being in prison, the pair have tried to make the marriage work.

Dillon helped spearhead an unsuccessful campaign to get Joe a Presidential pardon from Donald Trump, and often updated fans about him online.

However, at the end of March, following a scathing message from Joe on Instagram stating that Dillon ‘no longer cared about him’, it was announced the pair would be divorcing.

But in a dramatic U-turn, Joe has said from prison they weren’t planning to make their split official any time soon.

Currently serving 22 years in prison for the murder-for-hire plot of Carole Baskin and animal abuse charges, Joe said that the pair were still very much in contact. Joe is currently in prison for the murder-for-hire plot of Carole Baskin (Picture: AP)

‘You know, I talk to Dillon three times a day on the telephone, and we love each other very much,’ he told Entertainment Tonight.

‘He has been out there alone for two and half years because the first six months he lived in a car because we lost our house.

‘The guy has been through hell and he has stood by my side the entire time and we were talking about a divorce a few weeks ago so he could move on and we talked about it some more and we decided to stay married.’

However, Joe – who claims he is suffering from ill health while in jail in Fort Worth, Texas, added that he understood if Dillon ‘didn’t hang on’ for him, and said: ‘If he needs to move on I have to respect that. Joe and Dillon got married before he was arrested (Picture: Instagram)

‘He has told me time and time again … if I make it out of here alive, I still have a home to come to. So, he said he is not going anywhere, all right? That is all I can say because that is all I know.’

Dillon is yet to address Joe’s comments, with his last social media post being his divorce announcement on March 29.

He wrote: ‘To answer the main question the public wants to know, yes, Joe and I are seeking a divorce. This wasn’t an easy decision to make but Joe and I both understand that this situation isn’t fair to either of us.

‘It’s something that neither of us were expecting but we are going to take it day by day. We are on good terms still and I hope it can stay that way.

‘I will continue to have Joe in my life and do my best to support him while he undergoes further legal battles to better his situation.

‘Like I said in my last post, be careful of the assumptions you place on others. Everyone carries a challenge or burden you may not see. This is as true for me as it may be for you.’

Tiger King is available on Netflix.