Tracy Beaker and Justine Littlewood are back causing drama for the brand new CBBC series My Mum Tracy Beaker – and this is the content we’ve been desperately waiting for.

It’s almost been 20 years since the original TV series aired and, judging by the first-look trailer for the upcoming show, the frenemies are still locking horns.

In the 30-second trailer, Tracy (played by Dani Harmer) and her daughter Jess (Emma Maggie Davies) have the shock of their lives when they find Justine (Montanna Thompson) sat in her kitchen.

‘Tracy Beaker,’ Justine says. ‘And mini-Beaker. Wow, you look just like your mum.’

‘Are you Justine Littlewood?’ Tracy’s daughter asks, to which Justine coldly responds: ‘You’ve told her about me?’

As Justine delivers her savage response, up pops a whole bunch of throwback clips of the duo fighting taking viewers on the biggest nostalgia trip.

My Mum Tracy Beaker follows Tracy and her daughter Jess, as they try to scrape by financially, but with a close and loving bond that Tracy missed out on with her own mum.

Told from the perspective of 10-year-old Jess, the series tells how their lives are drastically changed with the arrival of Tracy’s rich new boyfriend, Sean Godfrey (Jordan Duvigneau).

Sean secretly admired Tracy when they were young and when he was simply known as ‘Football’.

Now, recently retired and with all the trappings of a successful football star, he wants to whisk Tracy and Jess away to a life of palatial mansions and fancy cars – but when everything starts to go classically Tracy Beaker pear-shaped, can Jess save the day?

My Mum Tracy Beaker is a three-part series based on Dame Jacqueline Wilson’s book of the same name.

This year marks the 30th anniversary of the publication of her iconic book, The Story Of Tracy Beaker.

My Mum Tracy Beaker begins on Friday at 5pm on CBBC. 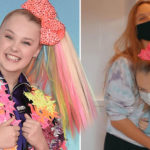