If you ask a handful of Marvel fans who the strongest Avenger is, you’ll likely get a whole load of different answers.

Carol Danvers’ (Brie Larson) powers as Captain Marvel are certainly mighty, Doctor Strange (Benedict Cumberbatch) would be a great person to have on your team, and you sure as hell wouldn’t want to cross Hulk (Mark Ruffalo) on a bad day. Or any day, come to think of it.

But if you ask Marvel Studios boss Kevin Feige the same question, you’ll be told that the answer is actually Elizabeth Olsen’s Wanda Maximoff – aka the Scarlet Witch.

Speaking at the New York Film Academy just over a year ago, he explained: ‘I think it’s interesting – if you look at Endgame, Wanda Maximoff was going to kill Thanos… That’s as scared as I’ve ever seen [him].

‘And if he hadn’t said, “Decimate my entire team to get her off of me,” I think she would’ve done it.’

It’s strange then, that in her seven-year stint within the Marvel Cinematic Universe (MCU), the character has never had top billing and has never felt like she’s ascended beyond an ‘also starring’ type of supporting role.

Until now, at least.

As of last week, the telekinetically gifted Sokovian-American is generating a whole lot of excitement, intrigue and critical acclaim in WandaVision on Disney+, a blockbuster TV series that officially kicks off Phase Four – all the movies and TV shows released between 2021 and 2023 – of the studio’s long (and lucrative) timeline of stories.

In the words of Sarah Harding, it’s about time – and considering Wanda is (officially!) the strongest superhero in the world’s biggest superhero franchise, her moment in the sun is long overdue.

To begin with, it seemed like she’d make a massive, immediate impact. In an end credits scene on 2014’s Captain America: The Winter Soldier, we caught our first exciting glimpse of her and super-speedy twin Pietro (Aaron Taylor-Johnson), with Baron Strucker declaring them to be ‘horrifyingly’ powerful.

Sure enough, they both had strong parts to play when they then made proper arrivals in 2015’s ropey Avengers: Age of Ultron; and when Pietro was killed off, leaving Wanda to join the Avengers alone, it felt like she was being set-up to be at the heart of the action from then on.

But then she… well, she wasn’t. Not really.

In her next appearance – 2016’s Captain America: Civil War – she was essentially kept under house arrest for huge swathes of the runtime, and if you scan the movie’s lengthy 650-word plot breakdown on Wikipedia, her name barely crops up at all.

Her only real storylines since then have revolved around her romance with Paul Bettany’s Vision, and although that contributed nicely to the emotional stakes of Avengers: Infinity War (not to mention it enabled her to have that big, brief moment with Thanos near the end of Endgame), there’s no arguing that she’s very much been a supporting player; nowhere near as prominent as someone with her potential deserves to be.

WandaVision, then, is where we finally get to see her take centre stage. And while yes, her relationship with Vision is still very much the focus (in case that’s not obvious from the title), she’s not lingering in the background of a massive ensemble anymore.

In the first two episodes – which premiered late last week – we join the duo as newlyweds in the world of a clichéd 1950s black-and-white sitcom; complete with picket fences, nosy neighbours (Kathryn Hahn in the MCU? Into it) and glorious fashion.

But nothing’s quite as it seems: it’s not long before we realise we’re not so much watching a show as a show-within-a-show and over the coming weeks we’ll presumably find out the truth about this bizarre reality our characters seem to be stuck in.

Olsen is a stunning actress (lest we forget she was BAFTA nominated in 2013), and it’s great to see her finally given the chance to properly shine in the MCU. She finds the perfect balance between candy-coated TV smiles and underlying oh-hang-on-this-isn’t-quite-right horror, and although the programme itself is definitely unconventional, we’re in reassuringly safe hands with her at the front.

And make no mistake, it is her at the front: Bettany is great, but in these opening episodes at least, the early hints of their TV world’s sinister undercurrent are all focussed on her.

The discovery of the little helicopter, the unnerving voice on the radio that seems to be calling her name, the sight of red blood… Towards the end of episode two, when a creepy beekeeper appears out of a manhole, it’s Wanda who quickly rewinds their reality back to a few moments earlier.

There are still seven episodes to go, and already lots of questions building up. Who is the beekeeper? What’s with that person watching WandaVision on TV at the end of the first episode? What’s Vision even doing here in the first place – isn’t he dead?!

It’s clearly going to be a gradual, slow-burning journey; only time will tell if the answers will be exciting enough to justify the pace. There were certainly moments in episode two when I feared we were walking a dangerous line between ‘intriguing’ and ‘boring’.

But whatever happens, it’s so great to finally see Wanda – and Olsen – given the vehicle she deserves.

The ‘boys’ club’ days of the MCU’s first few years are hopefully well and truly behind us (remember it took them 21 films to give a woman – Larson’s Captain Marvel – her own solo adventure).

And with Olsen already confirmed to appear in 2022’s Doctor Strange sequel, hopefully WandaVision is just the start. 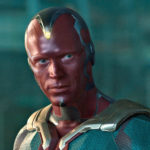