Fans may know her best from series such as The Crown, Netflix’s Sex Education and The Fall where she is predominantly known for having a British accent, but where is Gillian Anderson actually from?

It’s fair to say that we as Brits have totally adopted Gillian as our own and when we were think of the actress, we think of her strong, well-spoken, husky drawl that sounds just like someone who is, well, British.

Taking on former Prime Minister Margaret Thatcher’s accent was no problem for the star, and Sex Education’s Dr Jean Milburn fits seamlessly in with the other Brits in the cast – not to mention Stella Gibson’s accent being so on point, no one would dare question if she really were a detective for the London Met police.

So, you can imagine our surprise when the day came that we found out where Gillian is really from.

Spolier: She’s not British – instead, she was seen speaking in an American accent during an appearance on Late Night with Seth Meyers to discuss her stint on The Crown.

Where is Gillian Anderson from? Is she British?

She may have had us fooled, but no, Gillian is, in fact, not British.

The TV talent is actually American and was born in Chicago. Shortly after she was born, Gillian moved to London with her parents and lived in North London until she was 11 years old.

She and her family then moved back to the US, where she lived in Michigan and later moved to New York when she was 22.

While Gillian is American, she has German, English and Irish heritage, and is said to be bi-dialectal, as she adopts both the British and American accent and can easily switch between the two – hence why her British accent is so convincing.

Speaking about where she identifies with most, Gillian has previously admitted she is as baffled as we are when it comes to her real accent.

‘I’ve been asked whether I feel more like a Brit than an American and I don’t know what the answer to that question is. I know that I feel that London is home and I’m very happy with that as my home – I love London as a city and I feel very comfortable there. In terms of identity, I’m still a bit baffled,’ she told Blog Talk Radio in 2013.

That might be why then that she is often seen switching between accents in various different interviews, going from all-American girl to London’s finest.

Addressing her accent, she told The Telegraph: ‘Even on the phone my accent will change. Part of me wishes I could control it, but I can’t.

‘I just slip into one or the other. When I moved to the States I tried hard to cling on to my British accent because it made me different.’

How old is Gillian Anderson?

Gillian Anderson is 52 and best known for starring on shows such as The X-Files, The Crown, The Fall alongside Jamie Dornan, Sex Education and American Gods.

Appearing on the big screen, Gillian has featured in movies including The Last King of Scotland, Johnny English Reborn, The Spy Who Dumped Me and more recently The Sunlit Night. 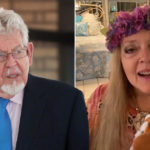