The Winterwatch team have seen some of the most incredible wildlife on the planet, but something sent in by a viewer appears to have left them baffled.

Viewers regularly share images of their gardens and wildlife they’ve spotted with the presenters of the show, and one social media posted an image which has left fans stumped.

One viewer called Lisa replied to a post on Twitter from Winterwatch co-host Megan McCubbin with a picture of a mysterious ball of hair.

‘I know it’s not an animal but I was just wondering if anyone knew what this was. Came across it today while out walking,’ Lisa said.

The post shows multiple pictures of a ball of hair suspended in a tree, and it’s one of the stranger things you’re ever likely to see while out for a stroll.

The Winterwatch presenters, who are usually quick to reply to fans on social media asking nature-related questions, have yet to respond.

It led fans to speculate online and call for answers. Someone on Twitter said: ‘One hour and no answers ? C’mon Winterwatch team – please ?!’

Another social media user called Mary then tweeted Lisa, saying: ‘I’m no expert and it has a look of a coconut fat feeder; but that would be unusual to find hanging over a footpath. I really hope someone can shed a light on this.’

Lisa replied: ‘Me too, but no one seems to know or is not replying.’

Another Twitter user replied, helpfully, suggesting it could be a ‘wild haggis’.

What could it be? Winterwatch has yet to reply to the picture, but viewers are desperate to know.

Winterwatch recently returned with Chris Packham, Megan McCubbin, Gillian Burke and Iolo Williams at the helm. Host Michaela Strachan once again had to remain in South Africa due to current pandemic restrictions.

The programme takes a look at the natural world as animals face the coldest and most challenging conditions of the year, and it’s become a go-to for millions of viewers taking solace in nature amid the coronavirus pandemic.

The BBC series saw a rise in viewing figures for the launch episode earlier this month, with 2.6 million people tuning in – an increase from 1.7million for the opener of 2020. 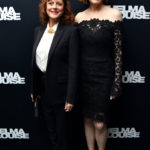 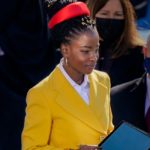 Amanda Gorman Is One To Watch In Fashion