Ana de Armas has decided to make a change as she revealed her chic new haircut following news of her split from Ben Affleck.

The Knives Out actress and the Batman star are reported to have called time on their relationship after ten months together.

In her most recent public appearance, the 32-year-old actress revealed she’s undergone one of the classic breakup transformations by chopping off her long locks.

In the clip (starting around 1h 23 mins), the actress showed off her fringed bob as she sported a plain white tee and a gold watch.

The Hollywood stars were believed to have moved in together in December, however, sources claimed the relationship has run its course.

A source told People: ‘Ben is no longer dating Ana. She broke it off. Their relationship was complicated. Ana doesn’t want to be Los Angeles based and Ben obviously has to since his kids live in Los Angeles.’

Another source also claimed the breakup was ‘mutual’ and the pair remain ‘amicable’.

They continued: ‘They are in different points in their lives; there is deep love and respect there. Ben continues to want to work on himself. He has three jobs lined up and he’s a solid father at home. They are both happy with where they are in their lives.’ 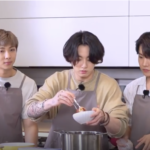