Ashley James has revealed her baby boy’s name following an excruciating 18-hour labour, which she says was ‘harder’ than running a marathon.

The Made In Chelsea star welcomed her first child with boyfriend Tom Andrews after giving birth on January 9.

Opening up about life with a newborn, the reality star told Hello! Magazine: ‘I love being a mum. Every day I love him more. Before he came along, I suffered from anxiety, but now I feel calm and content, as if I was made to be a mum.

‘I’ve run two marathons, but giving birth is harder. I was in labour for 18 hours, but Tommy was with me all the way, holding my hand. And when Alfie finally emerged, it was amazing.’

Ashley, 33, admitted that she didn’t want children before falling pregnant but now ‘can’t imagine not wanting a baby or being without him’.

The Celebrity Big Brother star also said that her relationship with Tom was strengthened by lockdown and probably wouldn’t have had a baby if they weren’t stuck at home.

‘Our relationship had already become serious before he moved in, [when the first lockdown was announced last year],’ Ashley explained.

Praising her partner: ‘There was none of the game-playing I’d encountered with previous boyfriends, and living together felt natural.

‘He’s very family oriented and although I knew from the start he wanted children, I didn’t feel ready.’

Ashley announced Alfie’s arrival on Instagram with an adorable photo of the tot’s feet.

She wrote in the post: ‘I just wanted to let you all know that on Saturday 9th January we welcomed our son to the world. He’s a very healthy 9.5 pounds, and Snoop is already being the best big brother.

‘I cannot wait to introduce him to you all properly, and share my journey with you, but for now we’re just getting to know him and focusing on keeping him safe in this crazy world. We’re both well and recovering.’

‘Massive thank you to our amazing team of midwives at Chelsea & Westminster for bringing him safely into the world. I love our NHS,’ she concluded.

Do You Need To Wear Two Masks? 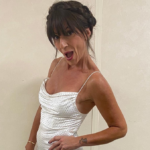