Katie Price has shared an epic throwback from her stint on I’m A Celebrity… Get Me Out Of Here!, reminiscing about her time in the jungle ahead of tonight’s launch show.

The former glamour model appeared on the ITV reality series in 2004 and became one of the programme’s most memorable contestants.

As the new line-up of celebrities prepare to enter the Welsh castle on Sunday evening for the 2021 series, Katie shared a throwback to one of her most stomach-churning trials.

She wrote in the Instagram post: ‘Wow it’s on again @imacelebrity I don’t miss the eating trials lol but what I can say is the kangaroo anus I eat tasted like cold mince meat 🤣🤣.’

Her fiance Carl Woods also reminisced on Katie’s time on I’m A Celeb but shared a very different photo – a throwback of the star showering in a red bikini.

He wrote: ‘Can’t wait to watch @imacelebrity tonight. Here’s a picture of my favourite I’m a celeb moment ever…. @katieprice bag of heat #purespice phwoarrrrrr mateeeeeeee.’

Katie replied: ‘Yes too you I am and I will be a bag of heat when you put the wood burner on and with have our cup of holicks to watch it 😂😂😂😂😂😂.’

The My Crazy Life star also warned her followers that she’ll be giving a running commentary of the new series, adding in her Instagram stories: ‘Can’t wait for tonight’s @imacelebrity having done the show twice and know it very well lol, I’ll be giving my views each night on all my socials.’

As well as being an entertaining campmate, Katie, 43, hit headlines during her I’m A Celeb stint after striking up a romance with Peter Andre in the jungle. The pair went on to marry months after the series ended and welcomed two children, Junior and Princess, before divorcing in 2009.

Katie recently returned from a trip to Las Vegas with fiance Carl, who she has been dating since June 2020.

The couple were rumoured to be getting married in Sin City and were pictured signing a marriage registry, but they later revealed it was all a prank.

After speculation about the pair tying the knot, he posted on Instagram: ‘I can confirm that @KatiePrice and I are not getting married in Vegas and never was [sic].

I’m A Celebrity… Get Me Out Of Here! returns tonight at 9pm on ITV. 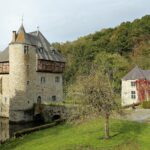 Must-See Villages and Towns in Belgium