Back to the Future star Christopher Lloyd joined Jaeden Martell in a live-action promo for Rick and Morty, sending fans into meltdown.

As a rendition of the show’s theme music plays, the two walk through a green portal from Rick’s portal gun into the iconic garage.

He then says: ‘We’re home, Morty’ to which Martell’s character replies with his iconic catchphrase: ‘Oh jeez…’

The video is captioned ‘C-132 #rickandmorty’ after the home universe of the titular characters in the show – and has left fans wondering what it is meant to be teasing.

The show is currently on a temporary hiatus in its fifth series, with the two-part season finale coming out on Sunday in the US.

The titles of the ninth and tenth episodes – Rickmurai Jack and Forgetting Sarick Mortshall – also don’t reveal much about what is going to happen.

So it’s unclear whether they will actually be making an appearance in the show or whether the clip was just a stunt to draw attention to the finale.

Rick and Morty bosses have been toying with alternate universes and multiple versions of their characters throughout the entire season, so it wouldn’t be surprising to see the protagonists meet live-action versions of themselves.

Of course, Lloyd already has a connection to the show, seeing as his character of Doc Brown from the Back to the Future franchise, and his sidekick Marty McFly (Michael J Fox), were the inspiration for the characters.

Meanwhile, Martell – who rose to fame starring in the It movie series as well as Knives Out – does not appear to have as much of a connection to his animated counterpart.

In 2018, Lloyd revealed to The Phoenix New Times that, while he didn’t know much about the animated series, he did have an interest in making an appearance in it.

‘I don’t follow it closely, but I’ve seen a few episodes and I gotta tell you, I think it’s a lot of fun. I know it’s some kind of parody of Doc and Marty,’ he said.

‘I’d like to, of course [make a guest appearance]. I think it’s really fun.’

Rick and Morty returns Sunday, September 5 at 11pm on Adult Swim in the US and the following day at 10pm on E4 in the UK. 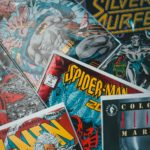 How Spider-Man: Shattered Dimensions Paved the Way for No Way Home and the Spider-Verse Clarkson’s Farm: Jeremy Clarkson urged to ‘slow down’ with farming by Countryfile star