Shane Richie’s son has hit back at claims he was ‘slagging off’ AJ Pritchard on I’m A Celebrity… Get Me Out Of Here!.

Shane Nolan has been live-tweeting his dad’s efforts in the Welsh castle, and hasn’t been afraid to share his thoughts on the other campmates keeping him company.

However, after supporting his EastEnders star dad from trolls, Shane Jr. was forced to defend himself against viewers who accused him of doing the same to AJ.

While watching last night’s episode, Shane wrote: ‘I can’t help it , AJ winds me up. He does. I don’t really know why either #ImACeleb’

‘You don’t like it when someone slags your dad off but you think it’s OK to slag other contestants off?’ responded one fan. ‘Some things are better left unsaid.’

‘I’m not slagging him, Christ,’ Shane hit back.

He later defended AJ as well from other online comments, as the Strictly pro was eliminated from the competition in a double elimination with Sir Mo Farah.

‘Can I just say I don’t agree with some of the comments said about AJ tonight, I’m not actually that bothered,’ Shane explained.

‘He seems sound but just not my cup of tea and I’m sure he would feel the same. Now move on folks.’

While in the castle, AJ and Shane were seen butting heads on more than one occasion, mainly due to the washing up quality.

As the only minor spat in camp, AJ admitted to Ant and Dec last night that it did ‘get on his nerves’, but brushed off the idea that they were both clashing.

But he then added: ‘Shane was really ill sometimes and we would go through different journeys each day.

‘We’d have highs, lows and I think everybody helped everybody. There’s no negativity.’ 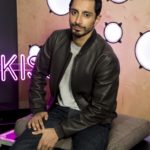