Bridgerton fans will receive some ‘exciting’ news this week as Netflix are reportedly set to make an announcement.

The period drama, starring Rege-Jean Page and Phoebe Dynevor, has become a blockbuster hit with around 63 million people tuning in since it debuted at Christmas.

Rumours are circulating that Bridgerton will be renewed for eight seasons and this has now been fuelled by claims of a surprise announcement.

According to Deadline, a letter from Netflix was sent to their shareholders and said: ‘This title has proven immensely popular and we’ll have some exciting news about Bridgerton later this week.’

Showrunner Chris Van Dusen recently admitted he would love to explore each character every season and, with the Bridgerton gang consisting of eight kids, it could mean the series will be around for a while yet.

Dusen told Collider: ‘This being a family of eight children and there being eight books, I would love to be able to focus and really tell stories and love stories for all the Bridgerton siblings. For each character, for sure. I would love that.’

It’s expected that season two of the Netflix series will follow his quest for a wife.

Season one left viewers completely enchanted with the love story of Daphne and the Duke of Hastings, Simon Bassett.

Their relationship began as a fake romance so Daphne could stir interest with other suitors and Simon could mask his pledge not to have children.

They of course fell for each other but found themselves constantly butting heads -and other things – with all the twists and turns of their romance. 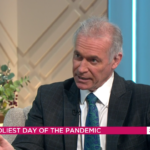