The second series of The Masked UK singer is really hotting up, with rumours of contestants’ identities spreading like wildfire.

Week after week, viewers have been left guessing who could be hiding under the costumes – from Sausage and Badger to Blob and Harlequin.

The panel – made up of Jonathan Ross, Rita Ora, Mo Gilligan and Davina McCall – have been on the case, unearthing stars Sophie Ellis-Bextor, Mel B, Martine McCutcheon so far.

Grandfather Clock is one contestant who has kept them in the dark. The singer first sang Rock Around The Clock by Bill Haley on the show, making a real impression.

But what do we know so far? And, more importantly, who’s behind the mask?

What clues have been given about Grandfather Clock?

There are a few ideas already circulating online about Grandfather’s Clock’s identity, with viewers speculating after being fed a number of clues.

It’s led some to speculate that the singer could have played for the England football team.

‘During my career I’ve had the good fortune of spending many of my hours looking after a great estate,’ the singer said, in another teaser.

There’s not been a whole lot to go on throughout the series so far, although he did tell the audience: ‘I’ve never been an academic, but I have been called a genius.’

Who could be Grandfather Clock be?

Grandfather Clock’s real identity has been one of the toughest mysteries to crack on the series so far. So far, the judges have guessed that David Seaman, David James, Des Lynam and even The Chase’s Bradley Walsh could be the ones singing under the mask. Viewers on the other hand, have all sorts of ideas. Most have gone for footballers, with goalkeepers Joe Hart and Ian Walker two of the names circulating online. Some even guessed that it could be Gary Lineker singing, which certainly would be a turn up for the books.

The biggest clue so far though came when Chris Kamara was asked whether or not he was Grandfather Clock on Steph’s Packed Lunch. The footballer-turned-singer didn’t exactly deny his involvement in the show at the time – could it be him?

Only time will tell.

The Masked Singer returns Saturday at 7pm on ITV. 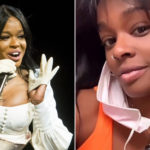 Gogglebox’s Amy Tapper reveals weight loss was sparked by not fitting into aeroplane seatbelts: ‘I was so embarrassed’