Ashley James is currently settling into motherhood and she admits she is loving her post-pregnancy body.

The former Made In Chelsea star welcomed her first child with boyfriend Tom on January 9 and has since said that she feels like she was ‘made to be a mum’.

Ashley, who has now revealed her son’s name is Alfie, has also been reflecting on her pregnancy journey after giving birth and commenting on how her body has changed, she’s revealed that she is much happier now, than she was at her skinniest nearly seven years ago.

The new mum shared a candid post with her followers on Instagram, which saw her confidently posing in her underwear just two weeks post-partum.

Ashley explained that she’s been ‘fascinated’ with her body changing while pregnant and after giving birth, and says it’s given her a new found sense of body confidence.

She wrote: ‘It’s 2 weeks and 3 days since I gave birth now, and I’m slowly starting to come back into the real world, and back online. ?

‘I mentioned I’ve been fascinated with my body since falling pregnant, and equally as mesmerized by it since giving birth. Watching it grow and having people tell you constantly you glow, to then seeing what it was capable of during childbirth, and then watching it heal and deflate, where suddenly you’re no longer gold you ‘glow’ and the conversation centres around whether or not you want to bounce back or not (with judgement on either side).’

Comparing how she feels now to a time when she was at her ‘skinniest and most toned’ in 2014, Ashley said she’s since been on a journey of self-love and now feels much more positive.

She continued: ‘I’ve loved my post birth body so far… I mean, now the stitches have almost healed and it doesn’t hurt to go to the loo. But I mean, I’m just in awe of how it’s adapted, and I actually think I look cute. ??‍♀️ And it made me realise that this whole self love / body confidence sh*t really works.

‘If you swipe along to the third photo, it’s of me at my skinniest and most toned in 2014- I’d just come out of a bad breakup and had become a bit obsessed with the gym. I was miserable and I remember before this event I had a total panic attack because I felt I looked horrible. It took 3 friends to get me dressed and reassure me. I had no self esteem and you can see how self conscious I was in my face and body language.

Ashley told fans: ‘Sexiness, body confidence, and more importantly happiness doesn’t come with a shape, size, or diet. I wish I knew that back then. But when I started the self love journey I didn’t believe I’d ever really feel happy or confident, but I persevered. I mean, it’s like slowly brainwashing yourself, but in the most positive way, but it works. ?’

The reality star revealed that she is excited to share more of her son Alfie with her fans – after previously insisting that she doesn’t want to lose her ‘identity’ now she is parent.

Speaking exclusively to Metro.co.uk prior to Alfie’s arrival, Ashley said: ‘I feel really ready for this new adventure, but also I’m looking forward to creating this new normal.

‘I’m very adamant that I want to be Ashley, I don’t want to lose my identity. A lot of people have this concept that once you’re a mum that’s it for you now and you have to give up this life and not do all the things that you used to love.

‘I’m very adamant that I want to be doing my work and I can’t wait for him to have his little festival headphones on. I’m under no illusion that it’s all going to be positive, but I’m really ready for the next challenge.’

Ashley shares son Alfie with boyfriend Tom, who she first met 10 years ago at work and reconnected with in 2019. 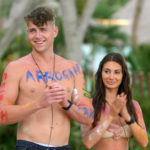 Netflix’s Too Hot To Handle renewed for second series 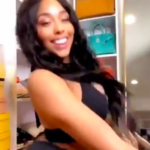