Charli XCX has shared a heartfelt tribute to musician SOPHIE, following her death.

The singer and producer died after a ‘sudden accident’ in Greece, at the age of 34.

Taking to Twitter, the Boys star penned an emotional message, explaining how much she would miss her friend ‘terribly’.

‘It’s really hard for me to sum up the special connection I felt with such an amazing person who completely changed my life,’ the 28-year-old began the lengthy tribute.

‘There are so many memories, so many small details, so many different views and incredible feelings and stories.

‘It’s impossible to summarise the journey I went on with Sophie. Even the most insignificant things felt enormous.

‘I can’t explain how I feel and I can’t encapsulate what a unique person she was in one small social media post.’

‘I will honour Sophie in my own time personally, in my grief, through my memories, through my work, through writing things only I will read,’ she continued.

‘But for now, all I can [say] is that I will miss her terribly; her smile, her laugh, her dancing in the studio, her gentle inquisitive voice, her cutting personality, her ability to command a room without even trying, her incredible vision and mind.

‘She taught me so much about myself without even realising. I wish I had told her more how special she was, not just her music, but her as a person.’

Charli – real name Charlotte Aitchison – concluded the post: ‘I love you and I will never forget you Sophie.’

She is the latest star to offer her condolences to SOPHIE, with Rihanna, Rita Ora and Sam Smith also sharing their own memories with the star.

SOPHIE was well known for her unique take on the pop genre, and became one of the only openly transgender women to be nominated for a Grammy – with her debut album, Oil Of Every Pearl’s Un-insides, tipped for the best dance/electronic category.

Her death was confirmed in a statement from her team, which read: ‘It is with profound sadness that I have to inform you that musician and producer SOPHIE passed away this morning around 4am in Athens, where the artist had been living, following a sudden accident.

‘SOPHIE was a pioneer of a new sound, one of the most influential artists in the last decade.

‘Not only for ingenious production and creativity but also for the message and visibility that was achieved. An icon of liberation.’ 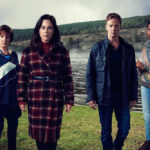 Where is Channel 5 drama The Drowning set?