Ex On The Beach star Ashley Cain has revealed his daughter is set to receive a stem cell transplant, after finding a donor match, but the surgery is going to be ‘tough’ as her leukaemia has returned.

Ashley’s daughter Azaylia was diagnosed with a ‘rare and aggressive’ form of cancer known as AML (acute myeloid leukaemia) and has been undergoing chemotherapy treatment in the last few months.

The four-month-old is due to have a stem cell transplant on Monday, but Ashley and his girlfriend, Safiyya Vorajee, have been warned by doctors that the surgery is high-risk, as Azaylia’s leukaemia has returned.

Despite the tot undergoing her second round of chemotherapy to clear her cancer ahead of the surgery, Azaylia’s leukaemia returned.

Speaking to The Sun, reality star Ashley explained that because of the leukaemia, Azaylia is at high-risk of complications from the stem cell transplant and it is less likely to be successful.

‘After recent tests and a meeting with the transplant team, we were informed Azaylia’s leukaemia has returned already. This is an indication of how aggressive her leukaemia is and indicates how important this transplant will be,’ Ashley said.

‘It came as a massive blow to us and brought us to our knees. It means she will have to go into transplant with leukaemia which is not ideal at all.’

He explained: ‘We were told that because of her age and the aggressiveness of her leukaemia, she is in the high risk category of transplant complications and the poor risk category for transplant success.

‘This news was incredibly hard to hear and has made every day even more difficult to face since.’

Azaylia is due to have the transplant on Monday at Birmingham Children’s Hospital. It will take four to nine months and Ashley revealed the process is going to be ‘tough’, adding: ‘It’s going to get a lot worse, before it gets better.’

Sharing pictures of his baby girl on Instagram, Ashley told his followers that he is every faith in his daughter, calling her a ‘fighter’.

He wrote: ‘We’re however doing our best to remain strong and positive for our daughter. She made it past the first stage of treatment against the odds and we truly believe that she will do the same this time around! She is a fighter, she will do this and we will be by her side every step of the way! ?✊?❤️ LETS GO CHAMP!’

Azaylia’s surgery comes two months after a record number of stem cell donors signed up in November, following Ashley’s plea to find a match for his little girl.

Ashley and his partner welcomed their daughter in August.

Fans will recognise Ashley from MTV dating series Ex On The Beach, where he starred in season on, season two and season five of the show. 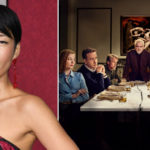