Rebel Wilson isn’t letting her recent break-up from Jacob Busch get in the way of her fun as the actress has jetted off to Florida for the Super Bowl this weekend.

The Pitch Perfect actress and a group of friends chartered a private jet on Saturday night and headed off to Tampa where the NFL game between the Tampa Bay Buccaneers and Kansas City Chiefs will take place tonight.

Clearly in good spirits, the gang decorated their private jet with football related merchandise and Rebel even got her hands on a customised jacket with the Super Bowl logo on the front.

In one video clip, Rebel and her pals are heard shouting: ‘Super Bowl 55 we’ll see you tomorrow,’ while the actress is seen posing on a bed cuddling up to a football in another photo.

Her friend Dave Osokow, who was on-board, commented: ‘We rolling!!!!!’

It comes days after the 40-year-old revealed she was a ‘single girl’ while teasing her Super Bowl plans, appearing to confirm her shocking split from businessman Jacob.

The couple dated for around a year and were pretty loved-up on social media but hadn’t been pictured together since Christmas when they enjoyed a romantic getaway to Aspen with friends.

Sources have since shed light on their break-up with one insider telling People: ‘Jacob was an amazing guy but just not the one for her long-term.’

Rebel had previously defended her relationship with the 29-year-old after critics suggested he was only with her after her weight loss.

Speaking to E! Online, the Isn’t It Romantic star said: ‘Some people on social media say, “Oh, well you lost weight, and then you got a hot boyfriend”.

‘But, what I do want to say to those people is that I actually dated Jacob when I was at my heaviest as well. So, it’s not like I suddenly lost weight, and then you’re like, oh, you get a hot boyfriend—that’s not how it works.’ 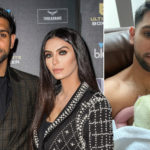 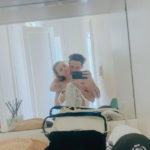 Brooklyn Beckham cosies up to fiancée Nicola Peltz for topless bedroom photo: ‘My other half’