Amid the sea of bipartisan purples and all-American maroons, navys, and whites on US Inauguration Day, Dr Jill Biden’s custom sky-blue coat and dress stood out thanks to their unique colour and additional bit of sparkle. The ensemble was made by New York-based up-and-coming designer Markarian. It was crafted out of wool tweed in a dreamy shade of blue — most likely a nod to the Democratic party regaining power. Dr Biden wore a silk mask of the same colour to complete the look. Her coat, which featured a velvet collar and cuffs in a darker shade of blue, was adorned with Swarovski crystals — a statement of sartorial optimism from the new First Lady. The tapered chiffon dress she wore underneath was also adorned with dainty floral designs made out of Swarovski pearls and crystals.

And, with a wave of her matching blue leather glove, the former Second Lady became the First.

According to a press release from the brand, Markarian designer Alexandra O’Neill designed Dr. Biden’s look alongside a small team in New York City’s Garment Centre. The pieces are intended to “signify trust, confidence, and stability.” O’Neill finished both the dress and the coat by hand in her West Village studio.

Dr Biden’s choice to support Markarian, which was founded by O’Neill in 2017 and includes both ready-to-wear pieces and bridal looks, only adds fuel to the rumours that, like Michelle Obama, the new First Lady plans to use her position to uplift American fashion designers. Obama famously wore Jason Wu at the Inaugural Ball in 2009, thus launching his namesake brand into the limelight. Throughout President Obama’s two terms in office, she continued wearing items from rising American brands, quickly making them household names. Dr. Biden followed suit during her husband’s campaign, recycling a fall ‘17 dress by 2020 CFDA American Womenswear Designer of the Year winner Gabriela Hearst, a New York-based designer known for her dedication to sustainability. On the eve of the Inauguration, Dr Biden wore the purple “Unity” coat and dress from New York-based designer Jonathan Cohen’s fall ‘21 collection to a COVID-19 memorial.

All that’s to say, New York designers should prepare themselves. The First Lady appears to be on a mission to bring American fashion to the White House — and with brands suffering during the pandemic, having a visual reminder that blue skies are ahead is very much needed right now. 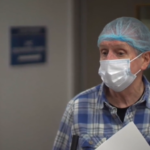