The Great British Bake Off crowned its winner on Tuesday night, with the show finishing as Channel 4’s highest rating comission of 2021 so far.

Viewers tuned in last night to watch Giuseppe Dell’Anno take home the coveted Bake Off plate at the end of the 12th series of the amateur baking show.

He beat off competition from Crystelle Pereira and Chigs Parmar after original favourite Jurgen Krauss was eliminated in last week’s shock semi-final.

Not, it’s been revealed the show triumphed in ratings too, with the programme attracting an average audience of 6.9 million viewers.

This resulted in a 37.2% share of the total TV viewing audience, rising to 8.0 million, which equated to 42.1% of the audience at its peak.

This was the second biggest ever share of the total audience in its time slot for any Channel 4 final (after 2020).

Of course, 2020 gave many shows all-time high ratings due to various restrictions and three national lockdowns at different points of the year.

The broadcaster recently announced with Bake Off would continue until at least 2024, after a new licensing deal was made with Love Productions, who make the programme.

Fans were delighted to see Giuseppe become the first Italian to take home the prize.

It’s the latest victory for Italy in what’s been quite the year for the Mediterranean nation.

The country has also won the Euros, Eurovision and the 100-metre final at the Olympics in recent months.

After taking the title, the 45-year-old chief engineer from Bristol told fans: ‘There are no words, I am speechless for once.’

The baker said his performance on the show prompted an emotional response from his usually stoic father.

He told Times Radio: ‘There is a message that some family friends collected without me knowing, that was shown to me while we were recording, that you have seen yesterday during the show, from my dad.

‘That is not like him. My dad is very much the strong and silent (type), the archetypal Italian father. He doesn’t speak much.

‘So the fact itself that he got himself to say those lovely things for the camera means that it must have had an effect on him.

‘He’s always been talking in a way – in inverted commas – to my sister and myself through his bakes. And I’ve only realised later in life that that was his way of showing us his love and affection.’

Giuseppe took the crown despite coming last in the final technical challenge of the series and oven issues in the showstopper, at the end of the very emotional episode. Selling Sunset: Is season 4 out now and will there be a season 5? 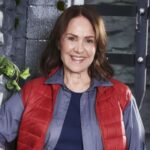