The AWS frontman, who competed at the 2018 Eurovision Song Contest for Hungary, died on February 5, months after being diagnosed with leukaemia.

The surviving members of the metal band confirmed the news with a statement on social media, writing: ‘To say the unspeakable, to describe the indescribable. That is what we now have to do. In June, Örs was diagnosed with leukaemia and now we are deeply saddened to inform you that he passed away yesterday.

‘He wanted to open up about his illness last month, he had planned to release his fist solo record this spring and we were set to make the fifth AWS record and play shows again this fall. During this period his bravery and dignity were exemplary.

‘His creativity, the depth of his lyrics and his presence on the stage will be greatly missed. Losing him is beyond our reach and he will leave a vast space not just in our lives but in the music scene.

‘Örs was the fire himself, warm hearted companion and friend, an inspiring person who you could trust and always rely on. He was a true wonder.

‘We’re opening our arms and hearts to his family, his friends and anyone who felt touched through his lyrics.

‘We were all very lucky to have had him in our lives and as much as he will be missed by us akk, we will remain with us all, every day.’

‘We are truly sad to hear that Örs Siklósi, who represented Hungary at Eurovision 2018 with the band AWS, has passed away.

‘On behalf of the entire Eurovision community, we would like to express our deepest condolences to Örs’ family, friends and the band members of AWS.’

Siklósi and his bandmates made it to the grand final of Eurovision in Lisbon in 2018, and ended up coming 21st with their song Viszlát nyár (Goodbye summer).

It marks the last time Hungary competed at the Eurovision grand final, as Joci Pápai did not make it out of the semis in 2019 and Hungary decided not to compete in the eventually cancelled 2020 contest.

The nation is not participating this year either.

During Siklósi’s time in the band, AWS released four albums, with their 2018 record reaching number two in the Hungarian charts. 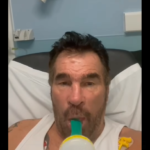 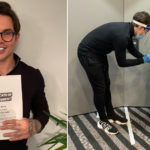