Alisha Wainwright has opened up about adding personal details of her own life into her Palmer character’s backstory to make the character more authentic for her.

Speaking to Metro.co.uk, Alisha revealed that she collaborated with director Fisher Stevens on the character, who is thought to have originally been written as a white woman, to make it as authentic as possible for her.

‘When I got the scripts, Fisher was like, “Read it and if there’s anything that you feel like your character would or wouldn’t say, or if there’s any thoughts that you have, I wanna know about them,”‘ she recalled.

‘We kind of delved a little bit into my backstory. And so some of those scenes at the bowling alley – my family being from Atlanta, and moving because of family – those are things that felt really authentic, to experiences of people that I know.

‘So they actually put those elements into the backstory for Maggie and I think having that kind of makes it feel like a more authentic person.’

It’s not just Alisha who collaborated closely with director Fisher – she’s got high praise for her co-star Justin Timberlake, who was a big team player on set.

‘What I was most impressed with was his ability to collaborate and to let Fisher guide the process,’ Alisha explained. ‘That’s something I was really enthusiastic about. Fisher’s such a great director.’

Meanwhile, in her efforts to make the character more authentic, Alisha actually shadowed school teachers, a process which she describes as ‘pivotal’ to the character.

‘They help you become better little people, especially at that age, and so that foundation of an educator was really pivotal to how I shaped my character.’

Also chatting to Metro.co.uk, Fisher echoed the idea of authenticity being the most important element of the movie, even down to the real-life bond that Justin and Ryder shared.

‘They really did have to kind of trust each other, and it was essential,’ he explained.

‘In the overall the scope of things, it was very important that everybody felt like they were living in this world and in this place and that it was authentic, and that it was real.

‘And if this movie ever got corny or sappy, it would die. So our whole mantra all the time was authenticity. And we just tried to make it as real as possible.’

Palmer follows newly released convict Palmer (Justin) as he returns to his hometown. He ends up having to look after young Sam (Ryder), a boy who likes to play with dolls and dress up as a princess.

Sam isn’t afraid to be himself, but not everyone agrees. The movie follows the pair, and school teacher Maggie (Alisha), as they navigate the ‘harsh’ world around them.

Palmer is available to stream on Apple TV+ now. 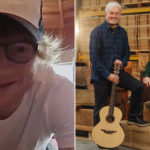 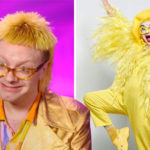