Fans of the movie Burn After Reading have just realised that the Hollywood movie’s plot bears striking similarities to the real life events of the Capitol riots and it’s freaking them out.

A laptop belonging to US House of Representatives Speaker Nancy Pelosi went missing during the Capitol riots earlier this month, when thousands of Donald Trump supporters stormed the building in an attempt to halt Joe Biden being certified as the next US president.

The FBI reportedly made an arrest over the weekend, taking into custody a 22-year-old woman in connection with the missing laptop.

It’s now claimed the suspect is also being investigated by the bureau for allegedly attempting to send the laptop to a friend in Russia who in turn hoped to pass it onto SVR, Russia’s foreign intelligence service.

It’s a plot twist you’d expect from a blockbuster Hollywood movie and, well, it actually has happened on-screen.

Burn After Reading, released in 2008, stars Brad Pitt and Frances McDormand as dim-witted gym employees Chad and Linda, who come across a CD which they mistakenly believe to hold top-secret government information.

They try to sell the disc to the Russian embassy and end up meeting an official there who is actually an undercover CIA agent.

Movie lovers couldn’t help but link the fictional story to the real life developments of the Pelosi laptop case as the news unfolded last weekend.

‘This is like a dumber version of Burn After Reading,’ one said of the events as the movie became a trending Twitter topic.

‘Burn After Reading is truly the most politically prescient film ever made,’ one noted.

Another reacted: ‘As I’ve often said, “Burn After Reading” is the definitive film about the Trump era.’

One described the dark crime comedy as the ‘only movie about national security that matters’ while another quipped: ‘This is the most Burn After Reading s**t of my life.’

‘Burn After Reading continues to be a documentary,’ one joked as another Twitter user said: ‘In an obvious case of learn your crimes from a movie where it didn’t even work in the movie – at My Pillow dude level of maga nuttiness.

‘This is the live remake of Burn After Reading (= a great movie, a silly spy wannabe).’

Burn After Reading boasts a star-studded cast, which also includes John Malkovich, George Clooney and Tilda Swinton, and was directed by the Coen Brothers aka Joel and Ethan Coen. 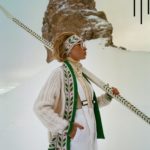 Slope To Street Style: Why The Snowsuit Is Taking Over Instagram