Cardi B is going all out for her new single Up and she revealed how she rocked a unique ‘outfit’ while filming promotional material for the tracks.

The WAP rapper showed off her intricate ensemble which was created by sticking tasseled metallic pink pieces onto the musician’s body.

She showcased the full results in a short video posted to Instagram on Tuesday as the 28-year-old posed in front of mirror.

‘This outfit was all sticker on.UP OUT FRIDAY !!’ she wrote. ‘You ready ?’

Hours beforehand, the Bodak Yellow hitmaker had shared the cover of her upcoming single which saw her rocking the outfit.

Posing against a deep blue cityscape, the rapper can be seen hovering over a rooftop pool on a suspended hoop.

Following the unprecedented global success of WAP – which means Wet A** P***y – fans have been eager to hear what Cardi was working on next.

In November last year, the star confirmed she had been working hard on the follow-up to 2018’s Invasion Of Privacy for the last two years, including during lockdown.

In a furious video explaining why her smash-hit with Megan Thee Stallion wasn’t up for a Grammy this year, Cardi said: ‘If I was pressed for a Grammy I would have submitted WAP for this year. I didn’t submit.

‘I didn’t want to be submitted to award shows until I put out my album because I think my album is so good, and it means something and I worked on it a lot. I’ve been working on it for almost two years.

‘Some songs are so emotional to me because I did them during quarantine. I’m not pressed or nothing, I’m not gonna keep doing this s**t constantly because y’all are upset. Y’all cannot take my success.’ 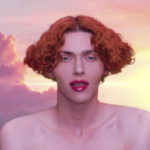 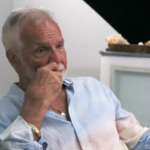 Below Deck’s Captain Lee visibly emotional as he opens up about son’s tragic death: ‘It’s a terrible feeling for a father’