A guest on BBC Wales Today left viewers in stitches after they spotted a sex toy standing proudly on her bookshelf.

Yvette Amos appeared on the news show on Tuesday evening to discuss the effect of the pandemic on employment rates, and how many are continuing to struggle to get work.

However, while Yvette was talking, what appeared to be a flesh-coloured sex toy seemed to catch everyone’s attention.

The plastic penis was on display on the guests’ bookshelf, standing out against the stacks of paper and files.

As a result, she went viral by the end of the evening, as grabs of her appearance soon made their way online.

Viewers found the moment hilarious and even cheered Amos on, with one person congratulating her on ‘keeping on top of her DIY’.

‘Absolute hero, if you’ve got it flaunt it, own it and make no apologies,’ wrote another.

Yvette is in good company when it comes to professional mishaps thanks to Zoom, and her accident was nowhere near as shocking as the errors others have made.

A council meeting in Rio de Janeiro was also disrupted by a man skiving off to have sex – not realising he was on camera.

Over in the UK it’s been a little more tame and cute, with news reporters finding their kids demanding their attention in the middle of live interviews.

Among the classics was a youngster who wanted her unicorn photo hung up, while another wanted some biscuits. 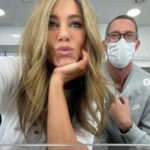 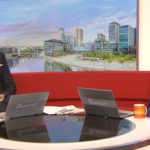 BBC Breakfast’s Louise Minchin still has Christmas tree up and fair play to her: ‘I turn the lights on every night’