Captain Sir Tom Moore was remembered on Lorraine today with a sweet never-before-seen clip showing him looking after a reporter interviewing him.

The 100-year-old hero, who died yesterday from complications of pneumonia and coronavirus, became good pals with ITV Anglia reporter Rebecca Haworth during his time in the spotlight.

Rebecca appeared on Lorraine today to remember Captain Tom, and his incredible legacy, and shared a sweet moment between them from last year where he worried about her being too cold.

In a never-before-seen clip, Rebecca and Tom were seen sitting at a social distance in his garden, preparing to discuss his autobiography when he checked in on if she was OK.

He tells her: ‘I’m always delighted to see you. I wish you’d got a coat, because you look a bit cold.’

Rebecca, who is in a blue summer dress, admitted it was a bit chilly but told him: ‘It’s worth it to see you.’

‘I don’t know whether it’s worth it,’ he then quipped back. ‘I don’t want you to be cold.’

The moment is just the latest in a series of moments paying tribute to the war veteran, who became a national hero after raising more than £32million for the NHS as coronavirus took hold across the country last year.

Walking laps in his garden, Captain Tom united the nation with his inspiring life story and cheeky wit.

In the last year of his life, he achieved his dream of meeting Queen Elizabeth, as well as getting a number one single with Michael Ball to You’ll Never Walk Alone.

Becoming friends with stars including Piers Morgan, his death devastated the UK, with thousands commemorating him, and what he did for the country. 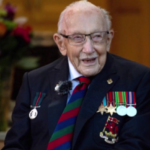 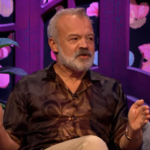