Dancing on Ice finally kicks off this weekend and host Holly Willoughby has already predicted the winner.

The This Morning presenter, who co-hosts the show will pal Phillip Schofield, thinks Myleene Klass has a good chance of winning the 2021 series.

The 39-year-old believes the HearSay singer’s musical background will give the former pop star an advantage.

‘I am going for Myleene,’ Holly began.

‘I think she has got musicality because she is a musician.’

‘She is a performer anyway and I just think she is goig to fall in love with it. That’s my little insider tip,’ she added to The Sun.

On Sunday, the first six celebrities will take to the ice rink in hopes of impressing the judges.

The following weekend, the final six stars will also battle it out.

The couples at the bottom of their respective leaderboards after both weeks will take part in a skate-off, looking to avoid being voted off.

TV bosses have also thrown a new format change into the mix this year.

The judges will now have the power to award one of the celebs their newly created Golden Ticket.

During the first two weeks, one couple per week will receive a ticket and be saved from the vote, ensuring they progress to the next round.

Olympic gold medal-winning skaters Christopher Dean and Jayne Torvill will also be returning to the judging panel along with dancer Ashley Banjo.

Doctor Who alumni John Barrowman will also once again be on the panel after replacing Jason Gardiner last year.

Dancing On Ice kicks off on Sunday at 6pm on ITV. 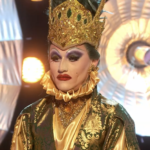 Drag Race UK: ‘Numb’ Joe Black expertly hits back at judges with proof her outfit was, actually, on point