The Emmerdale star, who is set to make his debut on the ITV show on Sunday, shut down the claims that there was anything going on between the pair.

It comes after it was reported that the soap star, who plays Jacob Gallagher in Emmerdale, split with his girlfriend Nicole Hadlow in December 2020 afterbeing together for three years.

Speaking to Metro.co.uk and other press Joe began: ‘Dancing on Ice is about telling a story to engage with the audience and the judges.

‘You have to have a certain level of chemistry between you and your partner. So I think everybody’s just kind of saw that we’re getting on so well and automatically assumed that something was going on. But there isn’t.’

‘We’re trying to do as best as we possibly can. Vanessa has never not been in the finals and she is very driven and competitive.

‘So I think we work well on that together, I’m competitive as well.’

Dancing on Ice bosses were forced to make a few changes to the show this year due to the coronavirus pandemic.

Viewers can also expect changes to the format of the programme including the new addition of the Golden Ticket.

As ever, six celebrities will take part in the first show of the series, followed by the remaining six the week after. The couples at the bottom of their respective leaderboards after both weeks will take part in a Skate-Off, looking to avoid being voted off.

However, this year, judges will now have the power to award their newly created Golden Ticket.

During the first two weeks, one couple per week will receive a ticket and be saved from the vote, ensuring they progress to the next round.

We can’t wait to see who the judges save… 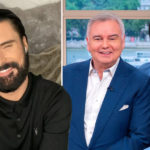