Doctor Who star Alex Kingston has expressed a desire to return to the sci-fi series, in the hope that she’ll be able to star in an episode alongside John Barrowman.

On New Year’s Day, John, 53, made a guest appearance in the Doctor Who special Revolution of the Daleks as Captain Jack Harkness, a character he first played on the show in 2005.

John went on the reprise the role in Doctor Who spin-off Torchwood, which ran from 2006 to 2011.

Alex, 57, portrayed the time-travelling River Song on Doctor Who, her last appearance being opposite the Twelfth Doctor Peter Capaldi in 2015.

But the actor has stated that she would be more than willing to bring the character back on screen, saying that her ‘TARDIS door is always open’.

Alex recently lent her vocal talents to the eighth The Diary of River Song, an audio series for Big Finish Productions.

While she and John starred on a Big Finish Doctor Who episode together, they were never actually in the same room.

‘I’ve done a [Big Finish] audio episode with John Barrowman but he wasn’t physically in the room with me,’ she told RadioTimes.com and other press outlets.

‘So I would love to do another adventure with Captain Jack, and I would actually love to do one on-screen with John.’

Alex is also ‘sure’ that at some point, her path will cross with the Ninth Doctor Christopher Eccleston on a Doctor Who audio tale.

The ER star added that she hopes the Eleventh Doctor Matt Smith will come on board at some point.

However, his schedule may be a bit too busy this year, what with production beginning on Game of Thrones prequel House of the Dragon.

Earlier this month, John broke the hearts of Torchwood fans when he visited a shrine dedicated to character Ianto Jones (played by Gareth David-Lloyd) in Cardiff.

The shrine has remained in place for 12 years, with Ianto’s death having been depicted in series three of Torchwood in 2009.

Can Lying On A ‘Bed Of Nails’ Cure My WFH Back Pain? 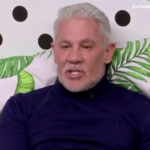 Celebs Go Dating: Wayne Lineker, 58, reveals he has never dated a woman over 30