It’s hard to believe, but it’s been 20 years since Peter Kay and co officially opened the doors to the Phoenix Working Men’s Club – and introduced us to all the barmy regulars that came with it.

Led by wheelchair-bound, wheeler-dealer club owner Brian Potter (played by Kay), viewers fell in love with the Greater Manchester working class gang and their efforts for a good night out.

This included the long-suffering club compere Jerry St Clair (Dave Spikey); Ray Von (Neil Fitzmaurice), the hustling handyman-slash-DJ; and Max and Paddy (Kay and Paddy McGuinness), the club bouncers who were a little more style over substance when it came to their job.

Written by Kay, Fitzmaurice and Spikey, the wonderfully bonkers world of the Phoenix was brought to life, after a one-off sketch in previous series, That Peter Kay Thing, became an instant hit.

Remember the phallic bouncy castle that would’ve scarred a team of children for life? Jerry’s attempt at hyping up Asda’s black bin bag sale via song?

It was a success that even Clinton Baptiste the psychic couldn’t have seen coming.

Commissioned for a full series in the year 2000, the team had to decide whether to fully invest in a comedy career – with Spikey even gambling a stable, 30+ year career in biomedicine for a life as a sitcom writer.

Speaking exclusively to Metro.co.uk, Spikey explained: ‘I had to make that decision – Do what? Do I leave? Do I resign? I’d spent 32 years in hematology.

‘I did, obviously, with little trepidation. I handed in my notice on Friday 13th in the year 2000. I remember I took my white coat off and hung that up, took my microscope off for the last time, and then I walked out.’

‘A few weeks later, I’m just down the road in Farnley in a car park singing Walking On Sunshine on stage, dressed as a giant berry, with a 20 foot c**k and balls inflated behind me, just thinking “…was it a good career move?!’ he laughed.

It’s fair to say the gamble paid off, with two beloved series created at the Phoenix, and the ups-and-downs of a working mens’ club trying to be as successful as possible (while spending as little money as possible).

It even launched some of the actors to megastardom – with McGuinness, now a prominent TV host thanks to his role on Top Gear, even celebrating the ‘proper good time’ he had on the show as it hit the anniversary.

Speaking in a Q+A, Paddy said: ‘The best times were off camera. We had so much fun.’

‘The best days were when all the cast were in at once,’ he added.

‘We’d all sit in this big dressing room/portacabin and take the p**s out of each other constantly! It got quite brutal.’

On reflection of the show, Spikey said the trio felt they could be ‘onto something good’ – and as a result tried not to miss a trick. ‘We worked so hard on it and not left any scene just being okay,’ he explained. ‘We’d always go back to it and think “We’ve missed a trick here, we can put a sight-gag in and we can layer it with just something on the television behind them or a poster or just somebody just wandering across”.

‘So we knew every scene was one of those that you could probably watch two or three times and still find something new in it, so we were hoping that people would pick up on that and just run with it.’

Recruiting their comedy pals and locals to fill out the Phoenix Club came with its own issues however, with the cast still finding their feet on how to behave on camera.

Despite being behind the creation of the show, Spikey even had to audition for the original That Peter Kay Thing sketch, even though he knew the character inside out.

‘I honestly hadn’t considered doing it because Neil’s a great actor, Peter’s a fantastic character actor. So it came out of the blue, really’

‘I was happy to audition for it,’ he added. ‘I might have been rubbish!’

As Jerry St Clair, Brian Potter’s somewhat begrudging right-hand man, Spikey was put to the test – with his character doing everything from filling in for an Eminem impersonator during a Stars In Their Eyes night gone wrong to ending up in a 70s disco outfit after a mixture of medication and alcohol goes spectacularly wrong.

‘The problem with us was none of us were actors. So, every scene took about 25 takes because we couldn’t get our continuity right, or get our lines right and people kept laughing,’ he said.

‘If you’ve seen the outtakes you’ll understand. We just had the best time.

‘One of the best times of my life, just writing it, rehearsing it, and filming it and just being together and creating it. It was just fantastic.’

After two series, the show came to an end, with a third series promised by Kay, but never materialising.

‘In fact there’s a whole series three been written for about 15 years but so many things get in the way in life, like touring and being a father.’

But Spikey reckons the time for Phoenix Nights’ return is over, and admitted: ‘I think it’s probably too late. I think we’ve been saying this for a while now and I think it is you know I think we’ve had those two series, and like you said, it’s become a bit of a classic.

‘It’s always a problem that you might come back and burst that bubble.

So where would the characters even be these days? Given lockdown, chances are, like a lot of working mens’ clubs, the Phoenix will be closed – but Spikey reckons they would’ve moved on in some way from the fictional Bolton world.

‘I think he’d probably have a little bar in Malaga or somewhere like that.

‘Holy Mary will be a lay preacher, and Max and Paddy have probably gone to America to Vegas, become doormen at the Sands!’ 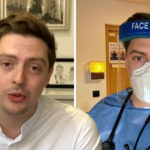 Praise for Dr Alex George as other Love Island stars party in Dubai: ‘This is how to be an influencer’