The Second World War veteran won over the hearts of the nation last year after he raised a total of £32.7million for walking 100 laps of his garden before his 100th birthday.

At the introduction of Wednesday’s instalment, pictures of Captain Tom appeared on the screen as they paid a heartfelt tribute to his life.

‘Captain Sir Tom Moore there, we will be remembering his incredible life in just a few minutes,’ Holly Willoughby began.

They then continued to share a video clip of Captain Tom as they spoke about all of his amazing achievements.

‘He captured our hearts with his wartime spirit, optimism and mantra of “Tomorrow will be a good day”,’ Phillip Schofield explained.

‘Second World War veteran, Captain Sir Tom Moore came into prominence last year with his aim of walking a 100 laps of his garden to raise money for the NHS.

‘He initially hoped to raise £1,000 but surpassed all expectations and raised a staggering £39million becoming a symbol of hope during one of the toughest years the country has endured.’

When the video finished opera singer Katherine Jenkins appeared via video link to honour the memory of Captain Tom.

‘I think like everybody out there I was touched by his story and definitely shed a few tears from his achievements,’ Katherine told the hosts.

‘I was excited to meet him. He surpassed everything I thought he was going to be. He was gentle, warm and humble.’

Before and after he died, many trolls targeted the charity fundraiser for taking a trip of a lifetime to Barbados in December.

On today’s Good Morning Britain, host Piers Morgan expressed his anger as he revealed that Captain Tom’s family have been left ‘hurt’ by the online abuse.

‘Hannah (Captain Tom’s daughter) told me how it hurt them,’ Piers explained on the programme.

‘It hurt them at a time of their darkest moment with their dad and grandad. ‘It just added a little bit more despair, misery and hurt onto what they were suffering as a family.’

Sir Tom had been taken to hospital on Sunday after being treated for pneumonia for some time and testing positive for coronavirus last week.

His family praised the care he had received from the NHS and said they had been able to spend time with him in his final hours.

In a statement, his daughters Hannah Ingram-Moore and Lucy Teixeira said: ‘We are so grateful that we were with him during the last hours of his life; Hannah, Benjie and Georgia by his bedside and Lucy on FaceTime.

‘We spent hours chatting to him, reminiscing about our childhood and our wonderful mother. We shared laughter and tears together.’

The statement concluded: ‘Whilst he’d been in so many hearts for just a short time, he was an incredible father and grandfather, and he will stay alive in our hearts forever.’ 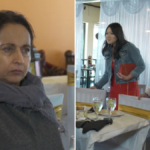 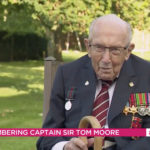