Lucifer star Lesley-Ann Brandt has marked an ’emotional’ day on set during filming for the final season.

The 39-year-old actress – who plays demon Mazikeen on the Netflix show – revealed she’s taken part in her last-ever wardrobe fitting for her character, while giving fans a glimpse of her costumes.

She wrote alongside the snaps: ‘Today snuck up on us. My final wardrobe fitting for Mazikeen… ever.

‘To say it was emotional, was and is an understatement.’

Brandt also posed with two of the show’s costume designers and praised the impact they had on the character ‘through her clothing’.

She continued: ‘These two women have been instrumental in helping me create this character while telling her story through her clothing.

‘@agata_louie and Sabrina. Thank you. And a special mention to @shellmatteo for always taking such good care of me on set. I will miss her and this. #thefinalstretch (sic)’

Her followers were equally emotional as they reflected on how significant the show and character have been.

One fan commented: ‘Mazikeen gave me so much strength and helped me persevere through hard times. She was always that badass warrior, i’m sad to see her go but you’ve played her flawlessly. i will miss seeing you as her. much love (sic)’

Another added: ‘Devastated. I can’t wait to see where Maze’s journey leads her. You did her character so much justice!’

A premiere date is yet to be confirmed for season 5B, which will air on Netflix before the sixth series can premiere.

Opening up on the second half of season five, show boss Joe Henderson teased: ‘Maze was left with a really raw, open wound at the end of Season 4.

‘She finally found love and then had her heart broken. So much of Season 5 is her dealing with rejection.

‘And so God is an interesting figure to enter into her life because she has questions… She’s also got someone to blame standing right in front of her.’ 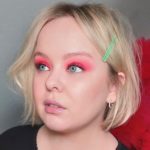