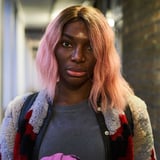 I May Destroy You was indisputably one of the most popular shows of the year, and will surely land itself at the top of many “Best TV of 2020” lists for its nuanced exploration of consent, race, mental health, and millennial life. And now, creator Michaela Coel has revealed that, six months on from when the show first dropped on BBC/HBO, she’s still in the process of grieving it being over.

Speaking on the podcast Grounded With Louis Theroux, Coel admitted she’s been in what she describes as a “post-writum depression” ever since the show premiered, revealing that she found the experience of bringing the story of I May Destroy You to life to be incredibly intense.

“It becomes the centre of your world and then, boom, it’s gone. And there’s nothing,” she explained. “I would work 16-hour days without realising that’s what I was doing. Now there’s a gaping hole where that work once was and it seems so easy to just fill it with the next thing, to fill it with anything.”

Grounded with Louis Theroux is back! ?

In the latest episode, @LouisTheroux speaks to actor, writer and producer @MichaelaCoel about speaking in tongues, sexual consent and her TV show ‘I May Destroy You’

In the hour-long chat, the writer and actor also told Theroux that she’s had to quickly adapt to the sudden fame the show’s success has brought her, revealing she’s gone so far as to change her email address to escape the constant barrage of messages she’s received about potential acting and writing projects. “It was too much,” she said. “I like writing stories and filming them. I love to act in projects I really believe in . . . but I’m not too interested in being caught up in the euphoria of being ‘hot right now.'”

So it looks like we – quite understandably – shouldn’t expect to see any new projects from Coel in the immediate future. In the meantime, we’ll be rewatching I May Destroy You to remind ourselves just how bloody good it is.