To all the parents trying to teach their kids science from home: Richard Hammond’s The Great Escapists is about to make your life a whole lot easier.

Joining forces with Tory Belleci, The Grand Tour star will be taking viewers on a pop-science adventure in the new Amazon series, where they’re stranded on a desert island.

And in an exclusive first look clip, Metro.co.uk can show you just how weird and wonderful their main creation is – a fully functioning clubhouse.

In a vlog filmed by Belleci and Hammond, the pair give us the grand tour (sorry) of their new life, including a water wheel they made which powers their lighthouse, heating and air conditioning.

Using scraps from their crashed boat and wood they found around the island, they’ve also got his and his toilets (so they can keep each other company), a bath, and a luxury boudoir for Hammond while Belleci sleeps on revolving hammocks to keep the lighthouse going.

The video – filmed for ‘Hammondland TV’ – is definitely keeping the pair entertained as their patience begins to wear thin.

At one point, Belleci can’t resist a dig at Hammond’s former job, picking up his ‘biggest fan’ and asking the actual desktop fan: ‘Do you like Top Gear?!’

The new series, which launches January 29, will reveal how they managed to make all of their new gadgets – which get more and more out of hand the more they start hating each other and they get more desperate to get off the island back to civilization.

Expect pineapple cannons, a functioning sand buggy (that Hammond may or may not crash in), an attempt at a steamboat and a giant Up!-like air balloon using condoms.

Speaking to the press ahead of the series launch, Richard explained: ‘What we wanted to pick up on all the sort of tropes of Castaway type movies, which is why we wanted to give a nod to all of those. I mean essentially the show is a pop-science show – it’s about science and the engineering, but we wanted to make it as easily digestible, and as accessible, as possible.

‘We had a lot of fun with it, so we sort of dramatize the whole thing, gave it a big story that arcs across the whole series, so that every single build is motivated by something, which means there’s a reason why we’re trying to do whatever we’re setting out to do.

‘I think once you’ve got that excuse for what it is that you’re doing it doesn’t matter how ridiculous it is.’

‘Being stuck on a desert island with Richard Hammond, you do tend to fall into pits of insanity here and there!’ Tory added.

Judging from what we can see here alone… we can’t blame them!

In order to make the show more interactive, bonus content and videos – like the in-depth look at the clubhouse – will be available via Amazon’s X-Ray.

To access, press up on your Fire TV remote or tap on your mobile screen.

Will they be able to make it back to safety before killing each other? 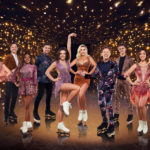 Dancing On Ice: Blasted as ‘irresponsible’ as celebs head to hospital with injuries amid pandemic