Marvel’s TV series WandaVision will clear up why Vision (Paul Bettany) is back and seemingly alive.

A quick reminder: In the climax of Avengers: Infinity War, Vision died twice. He was first killed by Wanda (Elizabeth Olsen) aka Scarlett Witch in order to destroy the Mind Stone and stop Thanos from getting his hands on it and destroying half the universe.

However Thanos rolled up unannounced and reversed the act with the Time Stone, bringing Vision back to life just long enough to murder him by plucking the Mind Stone out of his head.

In the follow-up Avengers: Endgame it appeared his death was permanent, but with WandaVision – set after the events of Endgame – launching in two days, evidently not.

Paul promised that fans will find out why, but we’ve gotta trust the process, man.

He told TVLine: ‘Trust in Marvel. We got ya. Everybody, stop working so hard to figure it out.

‘Buckle in and love it, and it will take you on a ride. All of these things are going to be explained.’

WandaVision looks to be a time-hopping adventure, where lovebirds Wanda and Vision try to settle into an idyllic suburban life but soon realise everything is not as it seems.

The Master and Commander star recently teased his future with Marvel, telling SFX Magazine that he ‘didn’t want to speak’ about the character’s fate but insisting that he loves the role of Vision.

The synopsis teases: ‘Wanda and Vision are living the ideal suburban life in the town of Westview, trying to conceal their powers. But as they begin to enter new decades and encounter television tropes, the couple suspects things are not as they seem.’

WandaVision is available to stream on Disney+ from January 15. 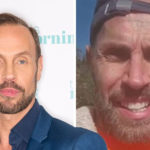