Sharon spoke on the opening episode of the new series about working as a civil servant in the Department for Transport, and was rumoured to have left her job before joining the show.

The former Lord Chancellor, who worked with Sharon in 2018 at the Ministry of Justice admitted he was ‘very surprised’ to see her announced for the new series.

He also thanked Sharon for her ‘kind words’ after she called him ‘very human, very natural and very funny’ while discussing their time working together before the series began.

Speaking to the Mirror, the former Lord Chancellor said: ‘Being a Cabinet Minister can be a pretty serious business most of the time, but there are the occasional lighter moments.

‘I suppose, as Lord Chancellor, I was trying to cultivate a reputation for authority and gravitas, but if I came across as fun, I won’t complain.’

‘I don’t normally follow the Love Island line-up that cloely,’ he added.

‘It’ll be something that might impress my kids more than most things I did as a minister.’

Sharon was one of the 11 contestants kicking things off in their quest to find love in the villa on Monday night.

The islanders heading into the Spanish villa for the first time since the 2020 summer season was cancelled due to the pandemic.

The first couples of the series were confirmed after the islanders met host Laura Whitmore for the first time during Monday’s launch episode. Sharon coupled up with Hugo Hammond on the show (Picture: ITV)

Chatting to Metro.co.uk and other press ahead of the launch, Sharon spoke about her beauty queen past – and was questioned on whether this made her more aware of her own actions will be portrayed on screen.

‘I didn’t watch that series so I don’t really know how she left, but I am aware of the situation where she lost her title,’ she said.

‘I think having a lot of other beauty queens that had titles walk into the villa, I don’t think necessarily it was that she lost her title because she had sex. I think it was just poor timing on her behalf.

‘When you have a title, there’s a lot of other things that [go under that]. Some of those other contestants who had sex in there as well, didn’t face the same backlash because they didn’t have the title at the time.

‘Having done pageants before won’t impact how I behave in the villa.’ 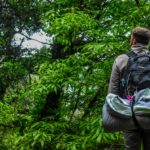